You must verify your email before you can download. 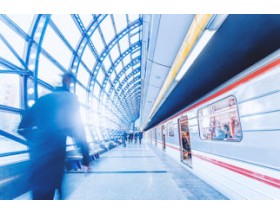 Passive train control (PTC) was proposed in 2008 in the United States as an attempt to provide increased safety, in which a wireless system to transmit the information is one of the key components to succeed.

GSM-R is used on over 70,000 km of railway lines to provide voice and data communication between train and railway station control centers. It is built on GSM technology and benefits from the economies of scale of its GSM technology heritage. In the last decade, public networks have been evolved from GSM (2G) to LTE(4G) for improved capability and capacity. Similarly LTE-R or other newer railway-dedicated communication technologies will replace GSM-R to upgrade the railway communication from voice-centric  to real-time multimedia-information-centric, providing enhanced passengers safety and comfort. Many countries are developing the latest generation systems (5G) and there are already many trials, it is reasonable to expect that 5G-R  will come around the trains in 2025, since railways desire to use low-cost off-the-shelf proven technologies and add applications to meet railway safety and other standards. It is predicated that GSM-R will become obsolete by 2030 thus GSM-R, LTE-R and 5G-R will coexist for many years.

To  make the transport networks safer, more coordinated and more efficient, many countries are developing intelligent transportation systems(ITS) using the most advanced and emerging technologies (computers, sensors, control, communications and electronic devices) in traffic management. ITS is automated and connected driving networks, in which vehicles digitally exchange information with other vehicles (V2V) and the road infrastructure (V2I).